In Search of a Framework

For a long while now I have always carried with me my philosophical groundwork, upon which everything I do is - fundamentally - based.

And yet - in terms of practical application - the philosophy is somewhat lacking; you have to accept the gulf between the fundamental reality of - well - reality, and the everyday occurrences in your world that demand attention, sustenance, and contemplation.

Now there are myriad of frameworks out there, a fraction of whom I list below:

And a lot of these overlap. Some interact rather well. Many are likely adopted by you reading this, and I include myself in that. Or you will have plausible alternatives, when it comes to a way of income, a way of socialising, a way of travelling, a way of communicating; etc. etc.

So what about me?

Whilst I am lucky enough to enjoy the benefits of a number of the above, without an overarching framework to I guess what I'm calling 'practical life' - the actual overall context in which I have been applying myself to this world has been, what I imagine is a default for many; with some structure, but with no overall framework to which it all hangs.

As you know I have always like to challenge what is presented to me by way of my wider world. And, certainly in recent years; politics has been a central focus of this - not necessarily from a 'political allegiance/viewpoint' line of enquiry; but more fundamental questions between my geographical location and the politics going on worldwide; between the circumstances of my birth (which sounds a lot more mysterious than I intended!) and my rights as a citizen of the UK.
However, I have also been questioning my relationship with money; with people in general; with the way in which energy is harvested; and all manner of things in terms of personal mental health, and how I want to fundamentally approach my wider world experience.

Which is all a bunched together selection of words that basically say 'I've been thinking about things', and I'm coming to a point where I need some sort of framework to hang it all together.

Now, this isn't about to be a radical departure from what you and I know about me; I haven't found a new religion; I'm not about to start a cult; I'm just figuring out a lens through which to see the more practical aspects of living on Earth: Nothing about how I behave is fundamentally changing; though I hope by having a clearer framework within which to tackle the topics of discussion I am encountering in these Interesting Times, I can form clearer judgements, about how to proceed.

And so, today, I present to you the Ministry of GINGER: 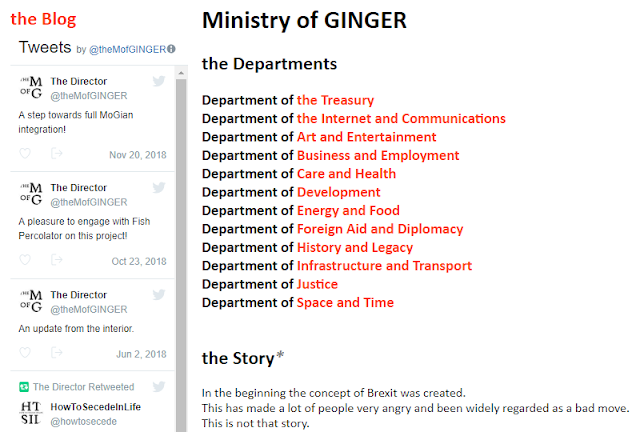 If I had to describe it in a little more detail, it would be a spreadsheet-infused individual approach to categorising the wider world, and establishing firm principles of behaviour under each department.
And I don't mean moral behaviour: Although this is led into by my ultimate philosophy, it isn't attempting to take those principles and apply them to real-world situations - those things are very difficult to link, once you understand the basics of ultimate philosophy.
No, this is more about my practical behaviour; my views; my politics; my fiscal behaviour - basically my relationship with the every day in the wider world.

And - if truth be told - I haven't entirely figured out what this is yet.

The Ministry of Ginger was an 'entity' I came up with a good few years ago now. It started out as a joke footnote on a few of my websites. Probably influenced by the Monastery of Sound which - in itself - was a parody of the Ministry of Sound; which I can only assume was intended as a pseudo-governmental department that dealt with the practical application of sound for entertainment.

I think the pseudo-governmental aspect stuck, and so - a number of years later - I find myself building my own 'government' - a self-government if you will.
As I painfully make clear in the MoG blog; this is not for anyone more than myself. I don't expect anyone to follow or adopt (although I guess the underlying principle of building your own framework for how you see the practical world, is totally up for grabs!).

This is for me. This is how I marshal my thoughts about an increasingly complex world I spend the majority of my time in. 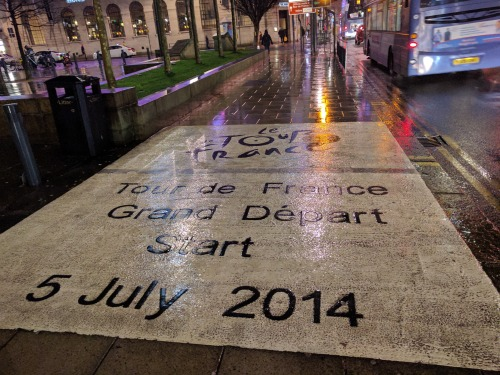 As a few of you may know, I decided to have my own mini-adventure for my 33rd birthday.

{A brief history - my cousin married a french woman 6 years ago, and I met one of her best friends - Laurence - at their wedding, and we have kept in touch ever since.
Laurence herself is getting married later this year, but now she and her fiance Laurent have a place of their own - with guest bedrooms! - I was invited to go and stay…}

Stepping off the plane in Nantes I was pleasantly surprised as to how warm it was. ‘Unseasonably warm’, was the verdict we came to.

For the first few hours of my stay, we did nothing out of the ordinary - and yet because the surroundings were new and unusual, whilst we drove back to their house, stopped off for bread, ate a steak lunch, then headed into town and parked in a multi-storey - there was already a surreal familiarity to the proceedin…
Read more