Showing posts from July, 2015
Show All

P is also for Polyamory 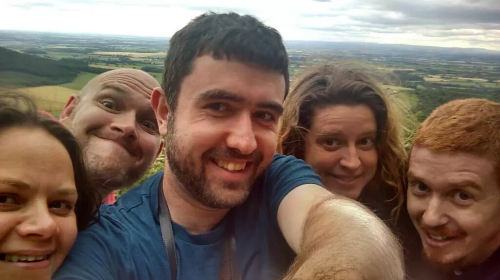 If you had asked me 17 months ago ‘what is Polyamory?’ I would have made some terrible joke about ‘it’s where parrots go to get their armour fitted’. Because I really did know nothing about Polyamory back then - about a lot of things in fact. But since then I have discovered a lot more about myself and the ways in which people operate in modern society, and I’ve met some pretty damn awesome people along the way. For those of you still putting together the vaguely cryptic messages I have made over the last few months; let me get to the point: I identify as Polyamorous in terms of my relationships. I know this for a few reasons - one, my girlfriend is in two other open relationships, which is not only awesome for her, but it means I have a unique friendship with one of her partners (the other isn’t exactly local so that is less simple!), and occasionally (well, once so far) we go off somewhere and have a great day out together. Another reason I know I am ‘Poly
Post a Comment
Read more

It has been something of a theme in the past few weeks that the phrase ‘Practical Philosophy’ has sprung up a few times, and I’m beginning to get my head around what that really means for me. Having established a pretty solid foundational philosophy for existence {as in what I can rationally determine from my own experience}, there are some pretty impressive gaps between this comfort zone of knowing, and - for want of a better phrase - the real world. Take for example a recent discussion sparked by the observation of a minute’s silence for the victims of the recent attacks in Tunisia. Two key areas of thinking came up as part of this discussion - my pacifism, and my lack of national identity (or reluctance to accept the concept of unity via geography). Pacifism Perhaps the most central tenet of my philosophy - and probably the only part of it that strays into the moral arena - determines that no-one is allowed to end your life; the one exception being your own self.
Post a Comment
Read more

State of the Daniel

In honour of our American friends, I thought I would put together a ‘State of the Union’-style address on this least arbitrary of dates {Ed: Yes, I started this yesterday…}. And, much in the American style, I thought I would also bastardise it and make it my own… Since talking about change back in January, there have been further changes. A lot of which takes place in an arena I hope to be able to talk to you more about in the next few months. But a side-effect of these changes is that I haven’t had much time to do much thinking about “stuff” and “things” - at least not like I used to - so I thought I would take a little time out and go through a few things on here, as I have wont to do in the past. - Philosophy As I said in a recent Facebook discussion; “Philosophy is weird. You figure lots of things out at a metaphorical level, but then real world examples come up and your brain just thinks *something* and you aren’t necessarily sure why :-|” See I’d got a
Post a Comment
Read more
More posts