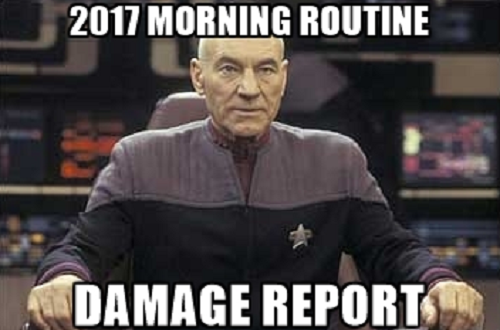 I’m not built to operate with a constant influx of changing information.

Ironic, given that the universe is made up nothing *but* change; but let’s skip the metaphysical here:

Every morning I check my Twitter feed, Reddit, Facebook, BBC News - obvious discussion about a personal bubble goes here - and there is so much to take in. Mainly because every time I go to sleep, about 4 billion(?) people have the tenacity to carry on with their lives; and some of them are in a position of power to do something that affects the way the world ‘works’.

Currently my bubble is dominated by the antics of the questionably-haired fuckwit at the head of the largest democracy on the planet (#MuslimBan, if future species are wondering what specific event in the last days of humanity I’m referring to - although that seems to have been blocked by the supreme court).

My particular bubble is focusing on the protests taking place in US airports about this - evidently some lawyers are working on petitions and doing things to help people. World leaders (notably Canada, Scotland) are tweeting that they are open to receive any people refused entry to the US. Theresa May is unsurprisingly conspicuous about her condemnation of a man she was holding hands with a few days ago.
But in other news; Justin Bieber got his head squashed at a celebrity hockey match; 3DTV is officially dead; I watched the Dark Knight Rises last night [good, but impossible to match TDK, thanks to Ledger] and enjoyed the latest episode of Taboo from the BBC; if mildly worried that Jonathan Pryce is going to say “fucking Americans” one too many times and join John Hurt in the great acting gig in the sky (please don’t go Zarniwoop!).

That’s a ramble about what my brain processed this morning; as well as planning my supplies for today’s activities [Bouldering, followed by Meepling!], and noting down the things I need to do on the internet before I can maybe relax with some Rocket League later.

I’ve talked about this information overload before, and ‘switching off from the outside world’ was my solution back then. But I don’t think that is a successful long-term strategy.

I think what I’m trying to do with HTSIL is first establishing what should be the logical constructs of a global civilisation, by starting from base principles and extracting myself from my current country-based orientation.

That’s the other problem with the amount of information coming “in”; every time I read it, I have to interpret it - attempt to determine the actual facts of the matter - and then try and rationalise it from my own experience; but that can quickly become exhausting - especially if you can’t directly relate to the news in question, and you have to spend energy on flexing your imagination.

All in all, I need to be careful not to take on too much - but, more practically; what I am keen to do is establish a framework within which I can then take on all information again, once I have a sounding board (IE an established set of principles) against which I can interrogate each and every piece of information that filters into my life through my experience and/or social bubble.